Made In Punjab is the newest addition to the Massive Restaurant group. Made In Punjab couldn’t have opened at a better location than UB City, Bangalore and it helps that it’s housed just next to it’s elder sibling Farzi Cafe! After the partition of India in 1947, the Punjab province of British India was divided between India and Pakistan. This is primarily one of the reasons the food culture is so rich when it comes from the land of Punjab! One of the most famous cooking styles that Punjab is known to have commercialized is ‘Tandoori’ and it’s now famous not just in India, but in Canada, UK too 🙂 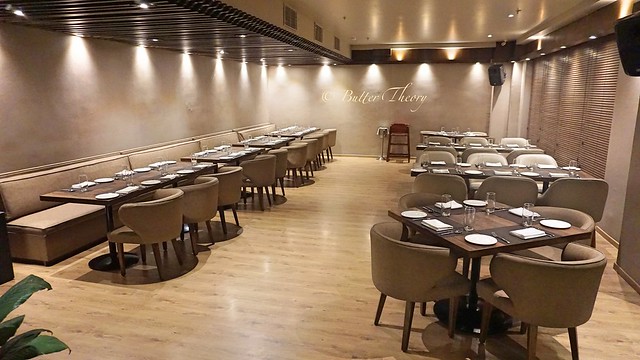 Punjabi Cuisine is hands down my most favorite cuisine and I couldn’t wait to check it out for myself! I was invited by none other than Mr. Suresh Hinduja for Made In Punjab‘s grand launch, where several dignified food enthusiasts of Bangalore were present. The Punjabis really know how to celebrate and the event teed off with guests dancing Bhangra to the Dhol wallas and punjabi music. The launch event was well co-ordinated and what helped the cause was that the restaurant opened up to the Public, only after several of these launches 🙂 We had some specially curated cocktails and some fine Punjabi delicacies that evening. 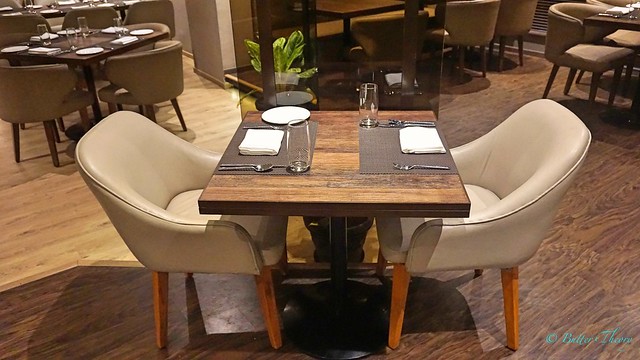 But as with any launch party, you can’t really sit down and have your meal peacefully! Hence, I needed to come back here one more time for an elaborate meal. I did so within the first month of it’s launch and I brought along 4 other foodies with me. Let’s see what we Made In Punjab had to offer 🙂 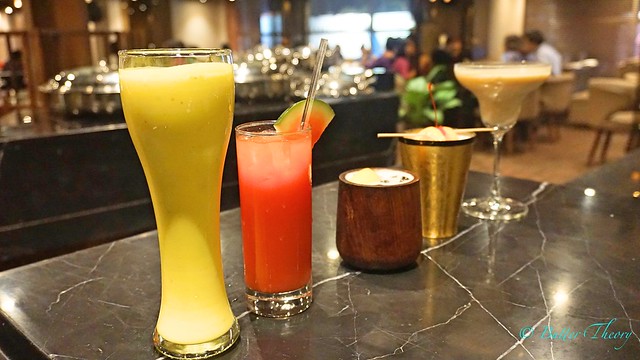 Punjabis take their beverage game very seriously or so to say, Punjabis are free ‘spirit’ed humans 😉 We tried a mix of mocktails and cocktails. 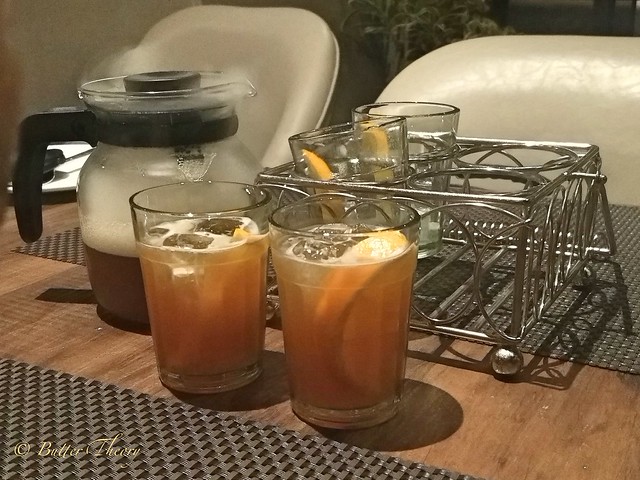 The one beverage you can’t afford to miss here is the Nashili Chai. It’s a mix of 3 alcohols; Gin, Vodka & white rum with an infusion of tea 🙂 It looks like they’ve taken some inspiration from their big brother- Farzi Cafe, which sells Chai Paani, the difference being the latter only has vodka. 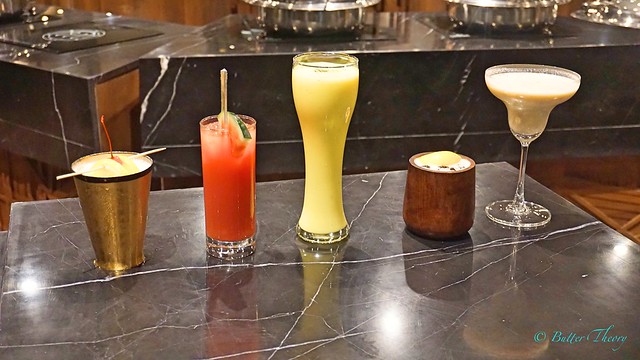 You could also have their special Syappa, which is a coffee & garlic combined with vodka. In their mocktails section, you cannot go wrong with their Kesar Pisteywali lassi and Hadwana Shikanji, a watermelon based drink.

Let me make it very clear here that the portion sizes here are massive (they’re true to their restaurant group name here, unlike Farzi Cafe, where you get minuscule portions!! ). 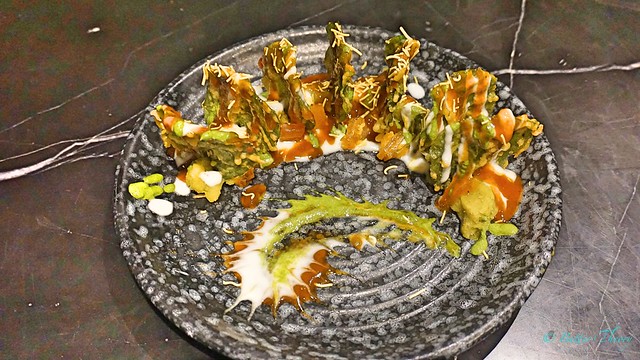 We tried the Popeye Paaji Ki Fav Chaat, which has a fried spinach discs smeared with yogurt, mint and tamarind chutneys. 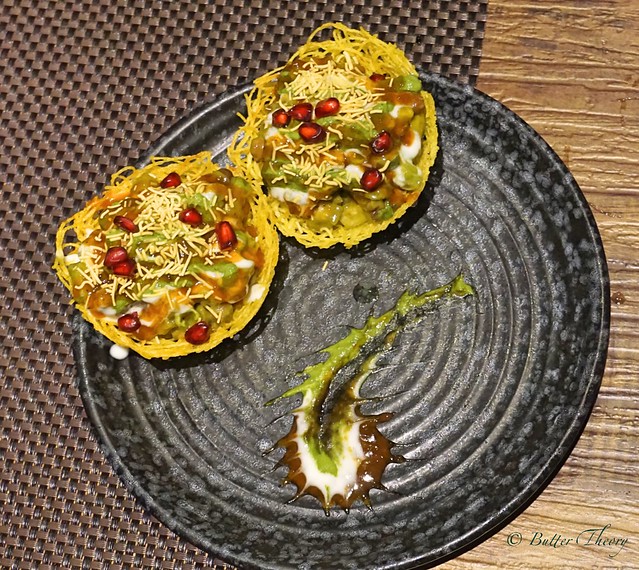 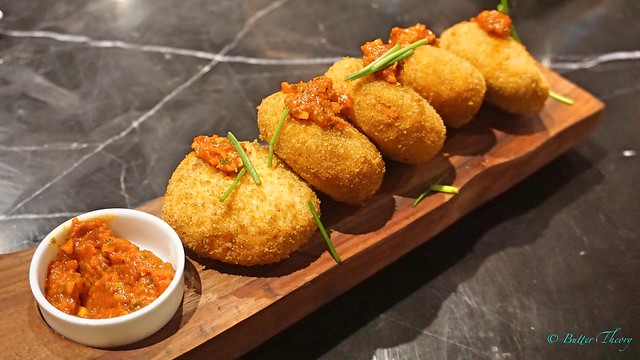 This is the section that has deep fried delicacies, but who doesn’t love ’em ? 🙂 We tried their famous LOL tikki , which is a six hour slow cooked lamb patty & bone marrow; Absolutely delightful 🙂 Dahi Pataka; a spiked yogurt croquettes, was one of my favorites! 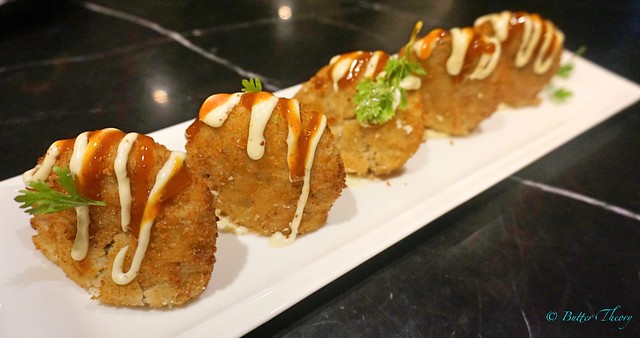 We also tried the Jau Mushroom Tikki, which I just didn’t fancy, but my friend quite fancied this dish! 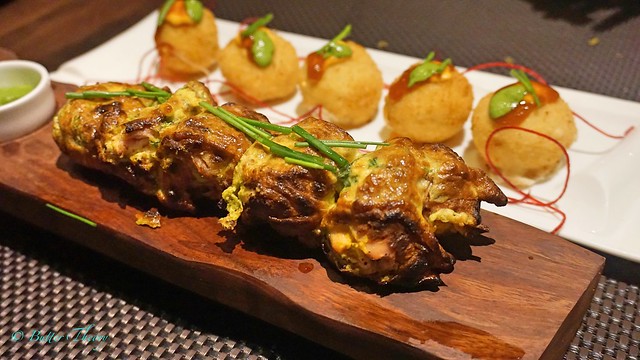 This is one section out of which I had the most expectations and they did not disappoint me. Although I found each of them extremely heavy and not easy to defeat! 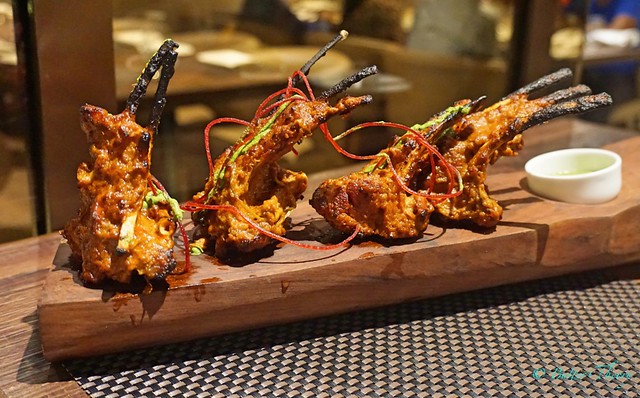 The one dish that stood out here was the Legacy Tandoori Champ; braised lamb ribs. 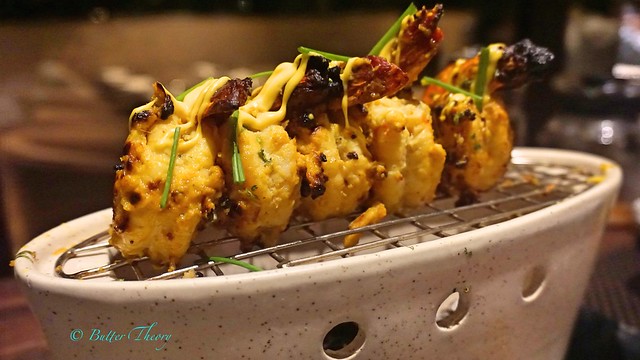 Another dish from this section that made a mark was the Gabbar Prawns. 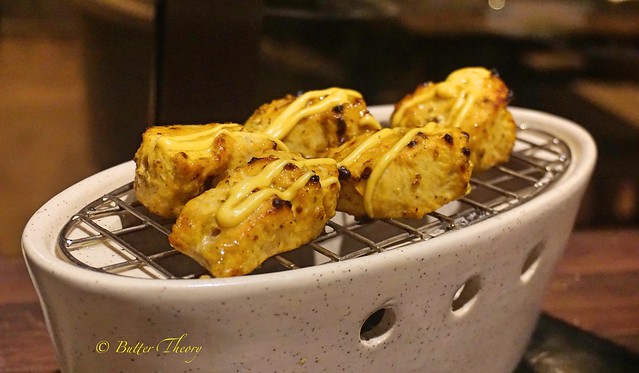 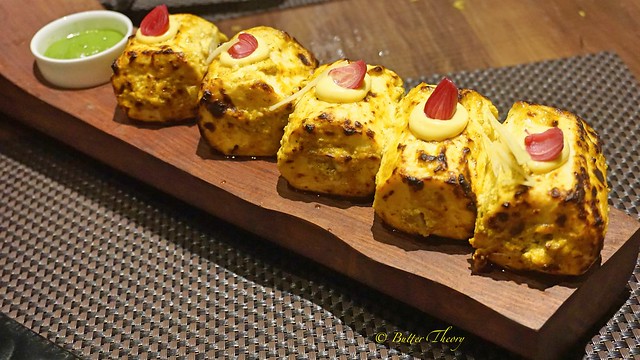 They have a section dedicated for Paneer and I thought that was very thoughtful 🙂 We picked the Paneer Barrel tikka, which is a paneer tikka with a pickled cheese filling. I thought you can’t have more than a couple of bites, for the sheer richness of the cream & cheese 😦 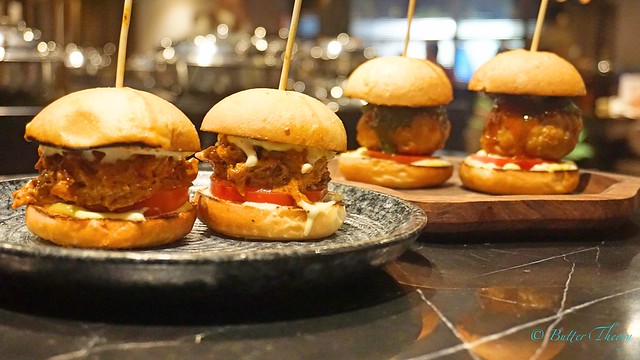 They also have a collection of sliders with an indian touch to it! We picked the Bun Samosa and Masala Kukkad Bun. Both of them were well spiced and had either chutney or cheese! 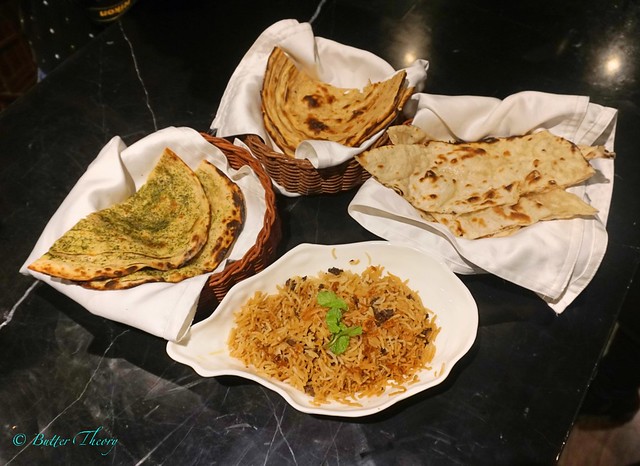 They have what they call Luxury B.C 😛 , which is their special Butter Chicken ( no points for guessing what B.C meant 🙂 ). This is one of the best you can have in the city. Another must have dish here is the Nalli Hard Kaur; a slow braised lamb shanks & bone marrow in a superb onion and yogurt gravy. In vegetarian, we picked their special Paneer Lababdar; paneer with tomato onion spices & cheese khurchan.

I love how each and every dish here is as good as a meal by itself, but hey you gotta eat your tummies full when you’re having a Punjabi meal 🙂 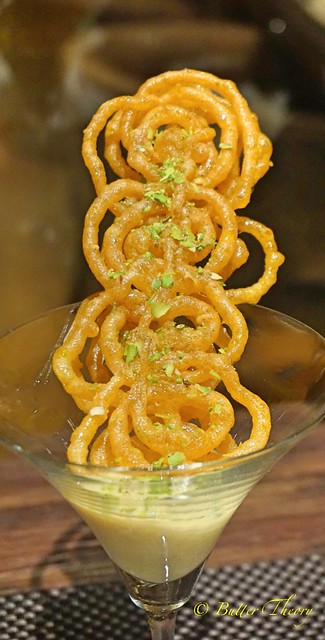 They’ve been known for making some amazing Jalebis and we weren’t going back without having some of those 🙂 They call it the Nukkad Jalebi; an array of 4 crispy jalebis laid on a bed of Lachcha Rabdi – Absolutely sinful!! 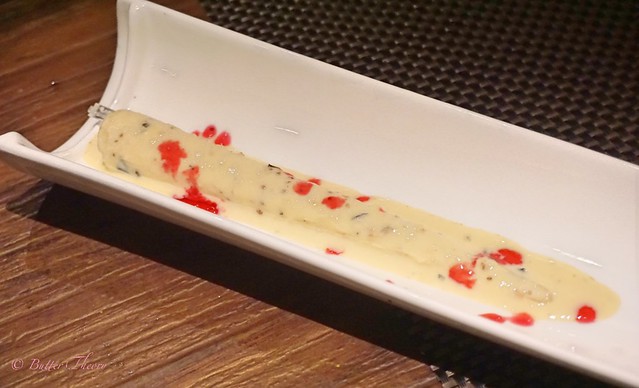 We also tried Goushalla Di Kulfi, which is not just your regular kulfi, but one that’s dipped in berry cream and topped with falooda. Although we did take a couple of minutes to click a few pictures, but the consistency wasn’t as thick as I would have liked. The taste however is unlike any kulfi I’ve had, more so because of the berry flavor! 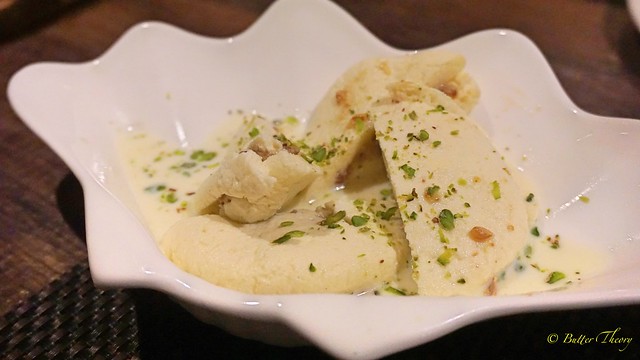 Since Rasmalai is my favorite indian dessert, I did want to try that out. At Made in Punjab, it’s served with a Dates Rabri and the combination was excellent 🙂 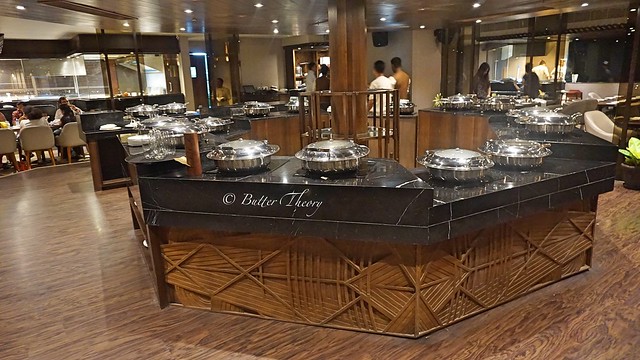 If you’re the kind of person who loves going for a quick buffet lunches, then this is the right place for you. But, like me, if you prefer an A la Carte dining option, you’re free to pick that as well during lunch 🙂

As I walked out of Made in Punjab, I felt like a content man! As I looked back on the food I had, everything was rich, exquisite and totally delicious. I couldn’t have had a better meal! If I had one regret, I would liked to have come here for lunch instead of the dinner 🙂

Their lunch buffets are very competitively priced between 699-899 depending on whether you are vegetarian and when you visit, weekdays opposed to weekend. An A la Carte will set you back by about INR 1500 for 2 people!