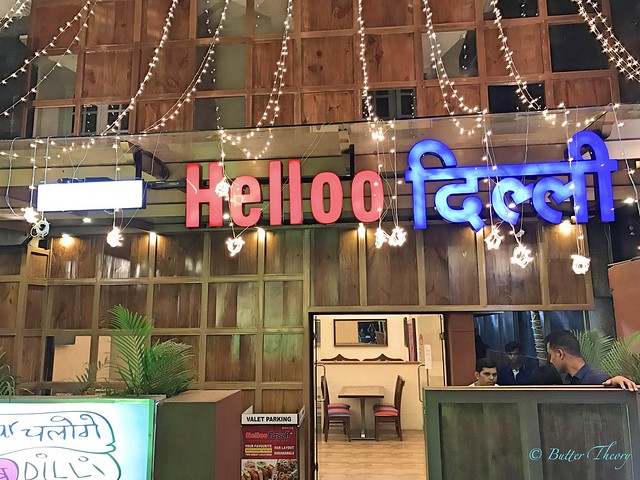 Helloo Delhi is a North Indian restaurant chain that is making waves in the south eastern part of Bangalore. What started out as a humble restaurant in HSR layout, 3 years ago, has come of age and opened up another branch in Koramangala in November 2016. 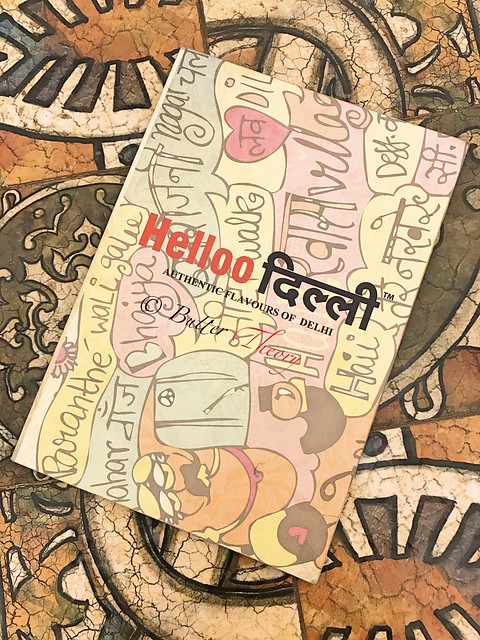 Koramangala is no stranger to seeing new restaurants come up almost every single day and it’s always a challenge for a new restaurants to battle with the big guns who’ve already established themselves 🙂 Helloo Delhi has got it’s strategy well sorted to be in the game and probably even decimate others in competition 😉 You may very well think what that strategy could be. It’s as simple as keeping things simple. All they’re focused on is making sure they do not compromise on quality and making sure they’re as close to the original recipe of a dish. So, no fusion, no molecular gastronomical mirages, no B.S, just true North Indian fare 🙂 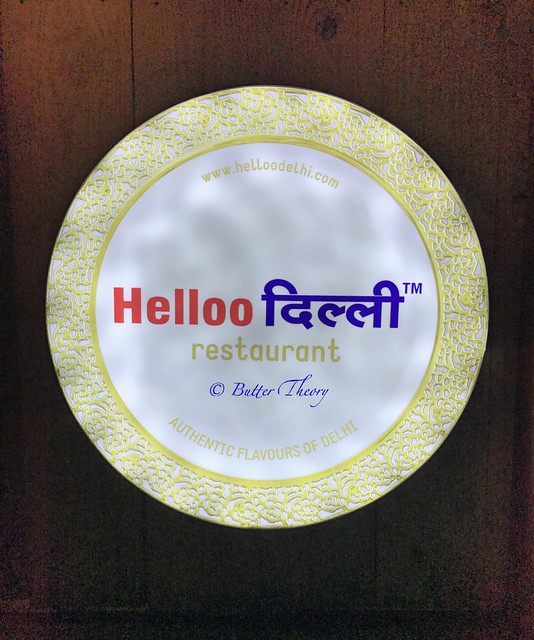 I was there at the Koramangala outlet a week ago on an invite by the owner himself, Mr. Karan Kapoor. I went there along with 2 other food bloggers on a Friday night. The restaurant is located on the 80ft road, a few meters ahead of the Wipro Park signal, if you’re coming from Sarjapur side. Finding a parking spot on that road is close to impossible. They have a valet parking which will make all your parking woes go away !! However, if you prefer doing it yourselves, just take the immediate left after the restaurant and park it there. 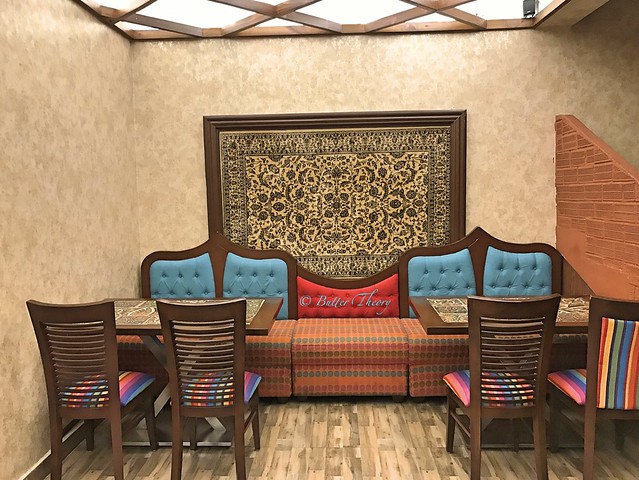 The restaurant decor has been tastefully setup, with bright colors and at the same time very pleasing to the eye. They have used a lot of blue and beige color combination. 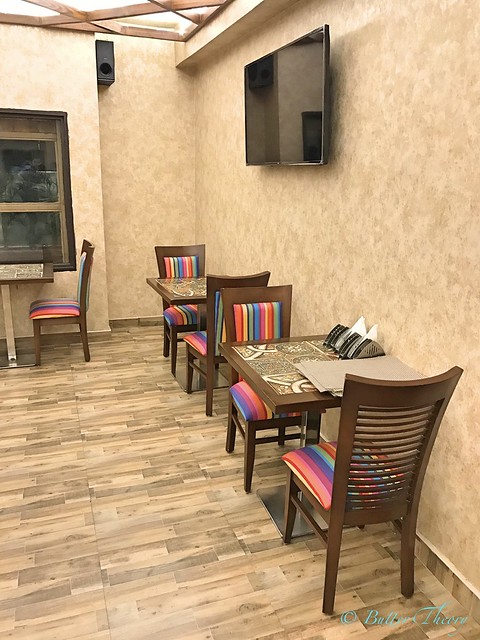 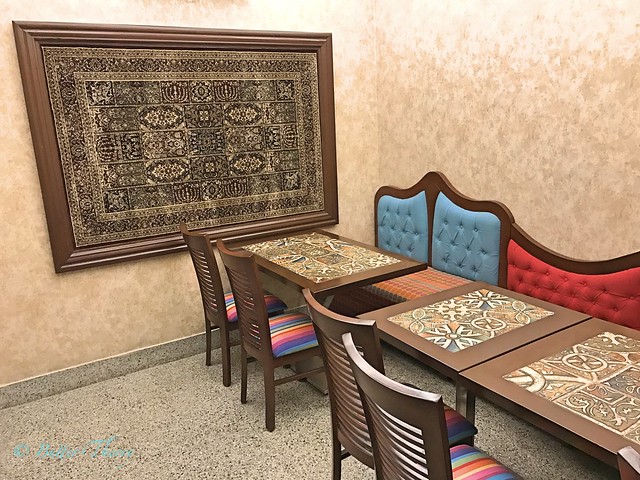 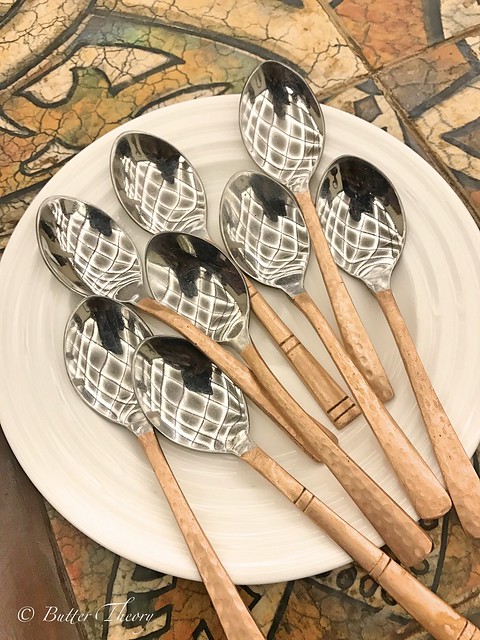 It all comes down to the food. No matter how hard one tries to get the rest of the important aspects right, taste of the food served is what makes one come back to a restaurant. Let’s see what we had 🙂

I started the evening with a glass of Gulabi Lassi. Nothing like a glass of fresh Lassi at a North Indian restaurant!

I also tried their Pisteywali Lassi which was a tad bit better than the Gulabi version.

But what took us all by surprise was the Chaas, which was spiced to perfection 🙂

Another beverage that we liked was the Aam Panna. However Virgin Mojito and Jaljeera failed to impress. 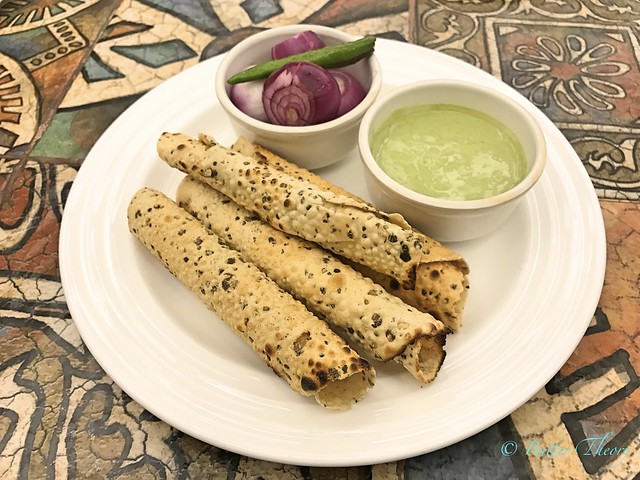 We were treated to some of the best appetizers that we’ve had in the recent past. Be it the quality of the produce or the simplicity of the dish, it was just something that definitely left a mark on me!

We started with Cheesey Hara Bhara Kabab which was a well done veg patty with cheese.

I was happy to see one of my favorite veg appetizers ; Dahi Ke Kabab, which looked & tasted extremely good.

The one dish on the vegetarian appetizer section that hit a home run would easily be the Amritsari Soya Chaanp. It was presented as an ice pop. The dish is a made of soyabean, which is marinated with tandoori spices.

Would you believe me if I told you they have 3 types of Paneer tikkas? Probably not, but you should !

I tried 2 of the 3 and my pick of the day was Lazeez Paneer tikka, which wasn’t overwhelming in terms of the spice level and easy to munch on. The quality of the paneer and the consistency in each bite is something to note!

This is the section where the restaurant comes of age and shows why you need to take them seriously. Each and every dish brings forth a simplicity that makes it truly delectable.

We started with a Doodhiya Murgh Malai Tikka, which is marinated with yogurt, cheese and spices. This was the best chicken appetizer of the night with succulent chicken thigh pieces with just the right proportion of sweetness and spice 🙂

Another must have in this section is Tangri Kabab, the size of each being bigger than elsewhere 🙂 It was roasted in the tandoor perfectly.

We also had Bhuna Murg Tikka , which had slightly more flavor than the other two I mentioned above.

We also had Amritsari Machchi Tikka which was a fish dish marinated in carom seeds and a tandoor spice. What we missed out on was the Tandoori Jheenga, which is what I’m going to try the next time I visit there 🙂

This is yet another of those revolutionary restaurants that has more dishes on the vegetarian main course compared to the Non-vegetarian!! All of you vegetarians can rejoice 🙂

We had their house special Dal Makhni, of which I didn’t get too much of the smoke flavor, which is probably why I liked it a lot 🙂 They take about 24 hours to prepare this unlike other restaurants that claim 48 🙂 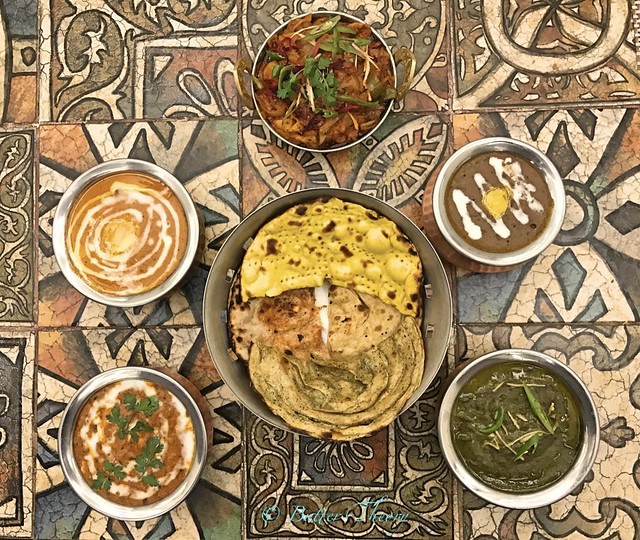 My favorite from the night was the Murgh Makhanwala. Notice how they don’t call it the Butter Chicken 😛 Pairing this with almost any Indian bread is fine, but works great with the garlic butter naan!

There are very few restaurants in Bangalore that serve Sarson da Saag and Helloo Delhi is proudly one of them! They did bring a pot of gold with this one, figuratively!! It was paired with the Makke di roti, which is just heavenly. We probably missed the butter there, but we were just too overwhelmed to just have it 🙂

You wouldn’t go to a North Indian restaurant and not have a paneer gravy! We asked for their special Paneer Lababdar and trust me when I say this, it was absolutely sinful. The quality of the paneer as I mentioned above, is really good. I could compare this one to the likes of Made In Punjab‘s Paneer Lababdar in terms of the flavor.

I’m not a big fan of semi gravies but we did try a couple of them; Tawa Subziyan and Kadai Soyabean, which I wouldn’t really suggest one to pick. 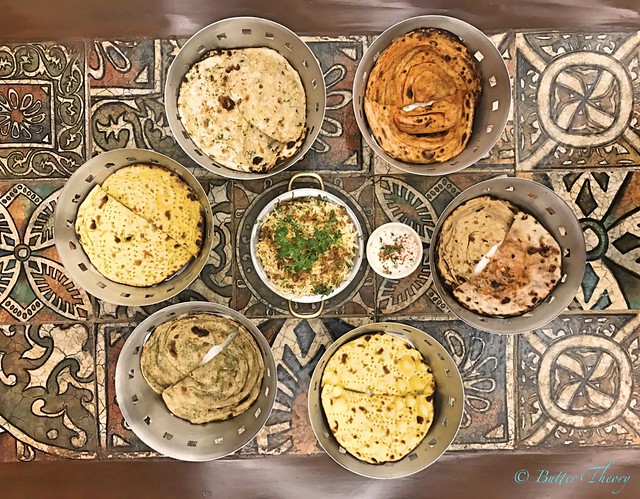 We did pair the various gravies with a lot of Indian breads! When I say a lot, I mean 9 different varieties! We barely missed out on a couple of them, but they were probably the boring ones. We had our priorities sorted; I mean why have Butter Kulcha, when you can have the Amritsari Kulcha and why have the Plain Naan when you can have the Garlic Butter Naan 🙂

I love Chicken Biriyani so our main course ended with a very different kind of Chicken Biriyani. It’s unlike the spicy biriyanis you get in Bangalore, it was very mildly spiced.

Fun fact: We set out looking for a restaurant that could end my craving for an Amritsari Kulcha and we ended up here as their menu had this 🙂 After coming here, it was less of the Amritsari Kulcha, but about how grand a Punjabi meal could get 🙂

But a meal isn’t over till you have a couple of Indian desserts, right? 🙂

Even though we were stuffed to the brim, we still managed to get a bite of each of the desserts !I had to ask for my favorite Indian dessert; Rasmalai and when it did arrive, it looked fabulous with the pistachios sprinkled over them!

Next up was the Gulab Jamoon , which in my opinion was a little sweeter than I would have liked. I was the only one who felt so, you may end up liking it 🙂

A dessert that I usually stay away from due to the amount of the ghee used in it is the Moong Dal Halwa. I did take a bite of this and was surprised that the texture of the dish wasn’t as smooth as I would have expected. It was grainy and easy to take down! It wasn’t overly sweet as well. The addition of nuts also helped 🙂

What stole the show and brought me back in time was the Delhi ki Cassata, which has been a childhood favorite of mine and rarely do I get to see this in Bangalore! If you don’t know what this is , it is a traditional icecream dessert from Sicily, Italy, with colorful concentric layers of icecream with a sponge cake at the center of the circle!

I would definitely come back to this restaurant when I crave for some Punjabi food and it helps that they deliver food if I’m not in the mood to walk down here!
What would also be interesting to see is how consistent the food is between this and the kitchen in the HSR layout would be.

I would sign off by saying that they are planning on opening up another outlet in Indiranagar, on the 12th Main and guess what, it may well serve liquor as well 🙂 Stay tuned for more updates 🙂