Songkran is the Thai New year’s festival. Every year, 13th of April is considered as the Thai New year’s Day! But, the celebration happens for the entire week 🙂 If you were wondering if it sounded like Sankranti, yes you’re right! The word Songkran was borrowed from the The Sanskrit word Sankranti, which is the harvest festival in India.

Sake, a pan asian lounge, part of the The Zuri, in Whitefield, Bangalore, invited Food Bloggers Association of Bangalore(FBAB). They invited FBAB to showcase their culinary prowess and to celebrate Songkran!! I was lucky to be part of the group of people chosen to attend the event 🙂

The chefs at Sake had created a special Thai Menu for the event and I’m only going to talk about that. I’m basing my review completely on that menu. It may be worthwhile to visit Sake some other time to try their regular affair. Not often do I get to travel to Whitefield, so when I did, I savored every moment, with lovely food 🙂

We were staring down a 5 course menu, hand crafted by the expert chefs at Sake. They were Soups, Salads, Appetizers, main course and dessert! 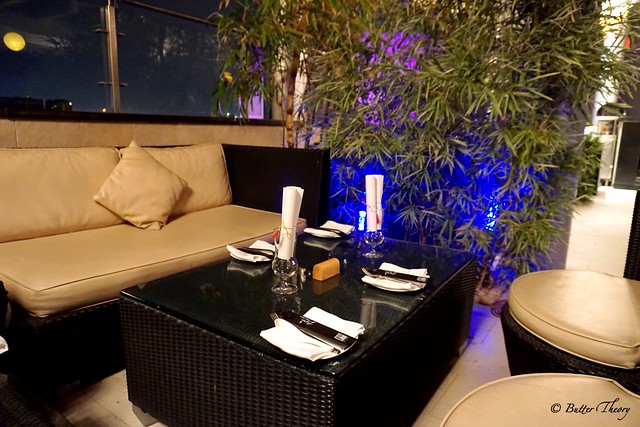 The class of a restaurant that’s situated in a five star property is beyond just the usual. The designers at Sake have done a good job at making this rooftop lounge, a beautiful place to be!
The seating was low, and unlike most restaurants. This was justified that most Asian, particularly Thai restaurants have low seating by the the Manager, PR, Marketing & Events. Low seating is probably all right, as long as the height of table is well above your knees, when you’re seated! It wasn’t the case here, the height of the table was the same as the seats. 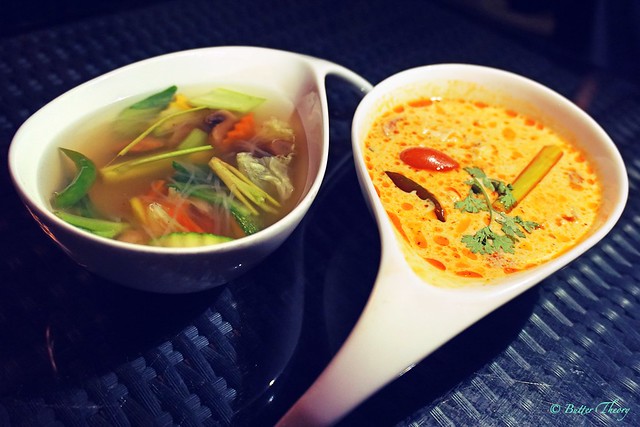 Tom kha gai was a refreshing coconut milk soup with chicken. The
soup had an amazing texture and had a very good taste. For me, this was the best dish of the night! Too early to crown the best dish? 🙂 Read on !

Kaeng jued woonsen pag was a clear soup and had some nice veggies and glass noodles. The taste of the soup was decent, I thought it lacked the punch I would have expected from a clear soup.

I tried 4 salads, all very different from each other! 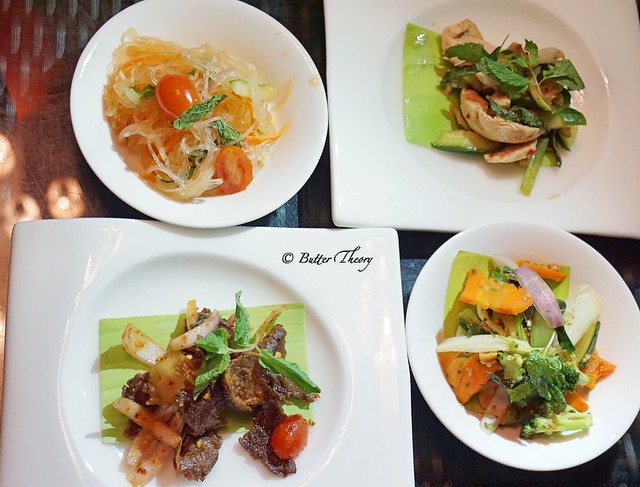 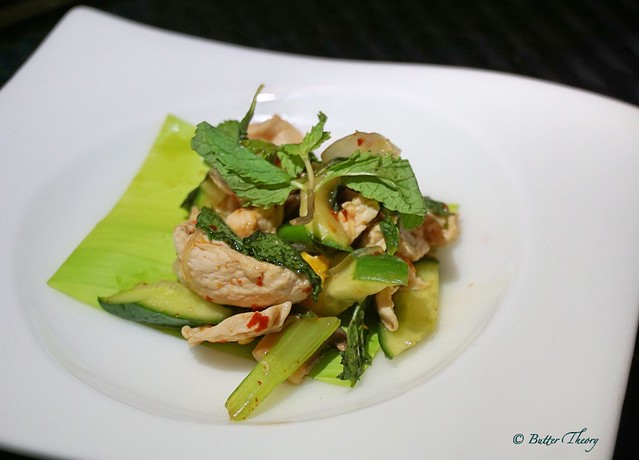 This was a chicken salad with mint leaves. The chicken tasted very good, mostly, because of the fact that it had a very nice lime and mint taste coming through!
This was the best salad of the night! Again, crowned the best dish of this course, too soon ? 🙂 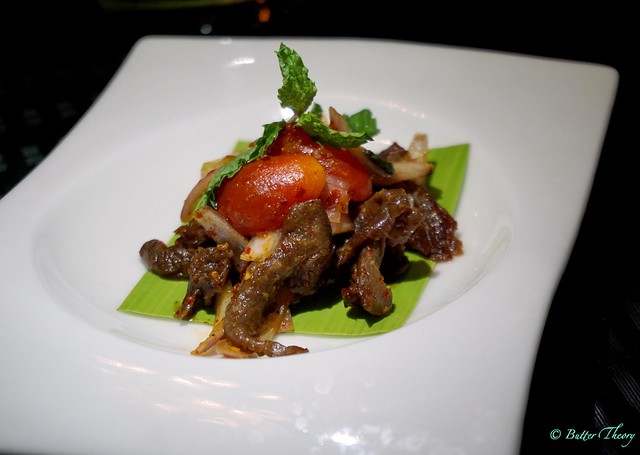 This was a sliced tenderloin in oyster sauce. 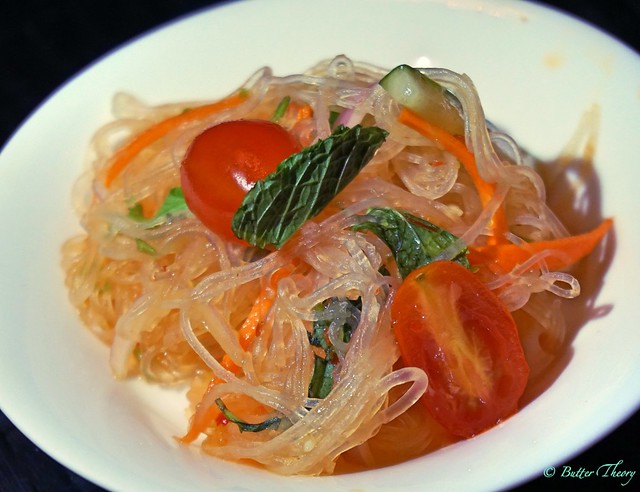 This was a salad with glass noodles and vegetables. I had not really had a dish which was just glass noodles. This was the first time, the dish was based around glass noodles. It was quite spicy and had good flavors. 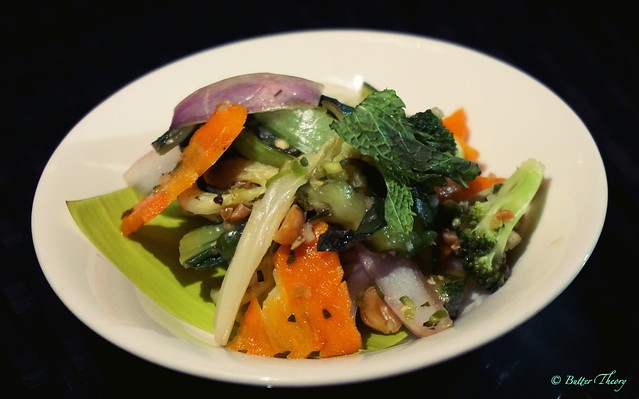 This was a nice salad that we’re all used to seeing; stir fried veggies with chilli and hot basil sauce. It had the zest that made me keep going for it!!

I had 4 appetizers. The presentation of all these were unique and looked great. Did they taste as good? Find out 🙂 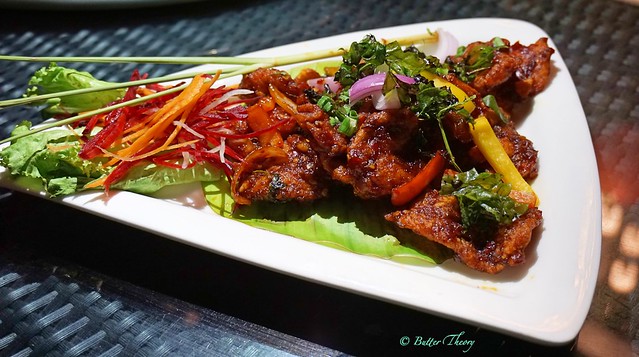 This dish was crispy chicken stir fried in roasted chilli paste. It was a decent dish, although I would preferred the chicken to have been a bit more tender and the batter not so thick. 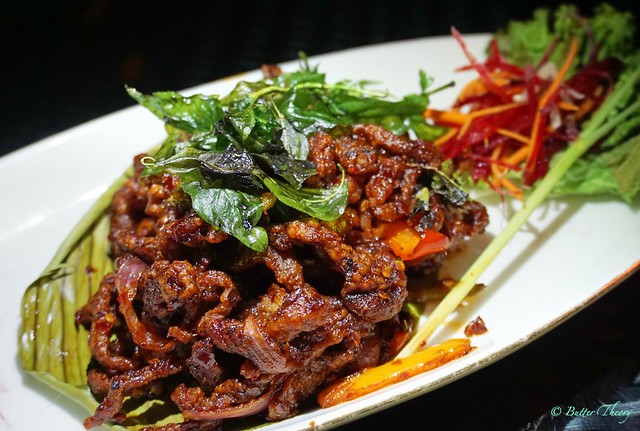 This dish was crispy fried lamb tossed with roasted chilli paste. The preparation style of this dish and the one above was similar. Just that the meat here was lamb and this was crispier. Out of the appetizers, this was the best dish! 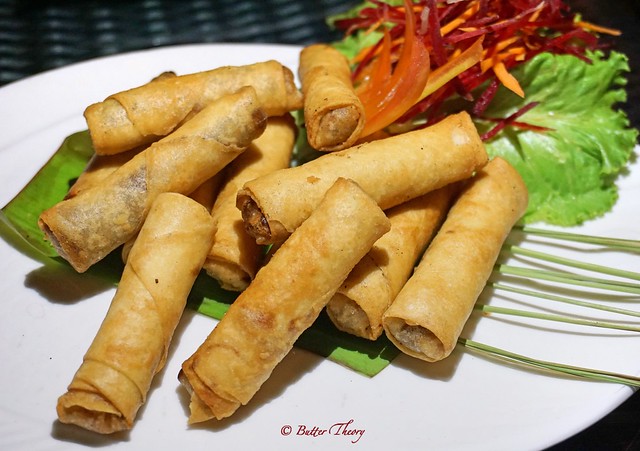 If only there were prizes for the most spectacular looking dish of the night, this would win hands down! This was thai vegetable spring rolls with glass noodles. Each bite was crisp and light. The glass noodles were probably a bad addition to this. We’re all so used to the regular spring rolls with just veggies in it ! 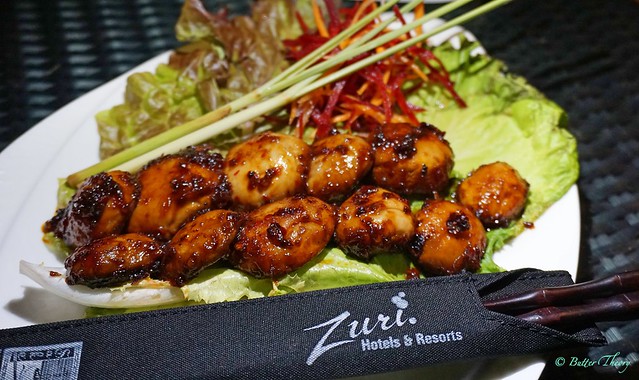 This was yet another beautifully plated dish. It was marinated grilled button mushroom with chef’s secret recipe 😉 I’m not a great fan of mushrooms and I wasn’t really pleased with the taste of this.

I had 3 dishes in the main course, which were served with jasmine rice. 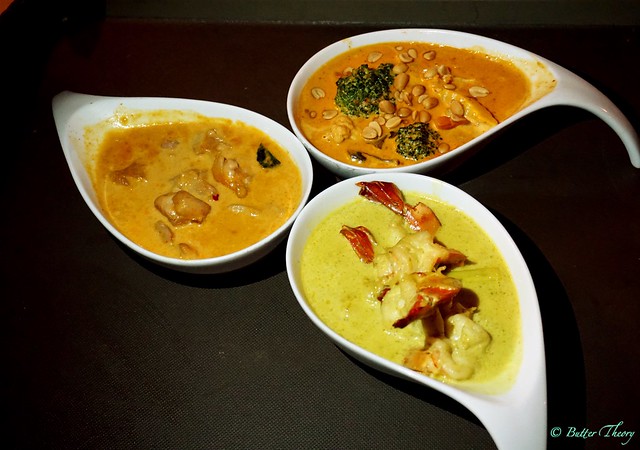 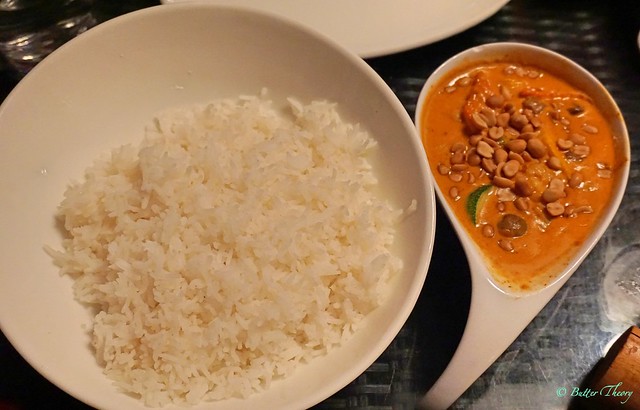 This was a prawn dish with thai green curry and pea brinjal.

This was a chicken dish in thai red curry and bamboo shoots.

This was a thai style phanaeng curry with peanuts and cumin.

Out of the three curries, the one which was the best was Kaeng phanaeng. The crunchy peanuts and the thai curry, went very well with the jasmine rice! 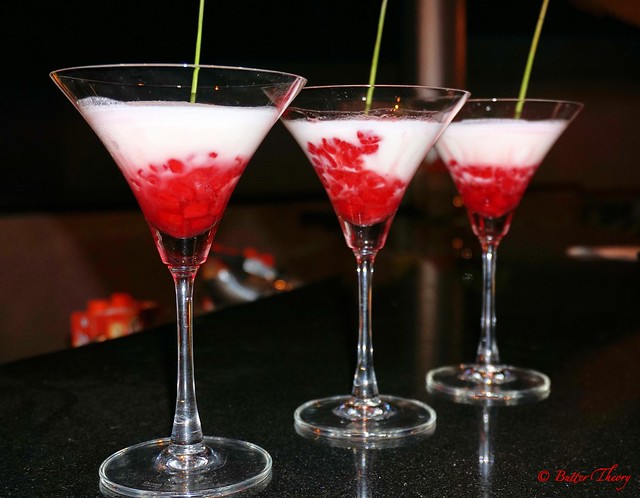 I’ve been having a lot of desserts off late, with the base being coconut milk. This was no different. But what was added into it, made it stand out!
This dish had chilled water chestnut with coconut milk.
On a first look, the water chestnuts look like fake pomegranate seeds 😉
But, the red color came through because it was chilled with rooh afza 🙂

Water chestnuts are knobby edible tuber of a water plant indigenous to Southeast Asia. The water chestnut’s brownish-black paper-like skin resembles that of a true chestnut, but its flesh is white, crunchy and juicy. The flavor is bland with a hint of sweetness.

While we were at the fantastic five course food at the five star Sake, we had a few beverages.
Here are some of the cocktails & mocktail pictures 🙂 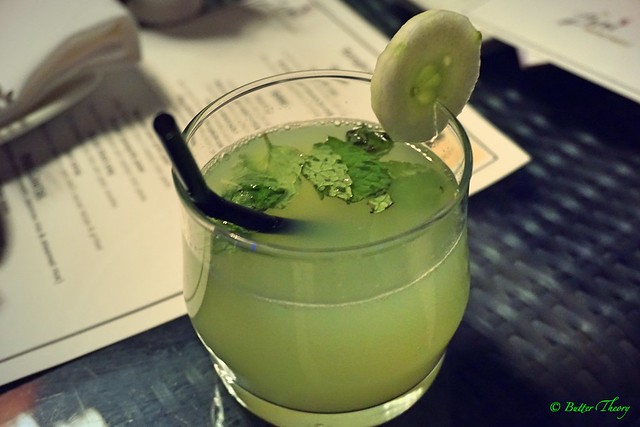 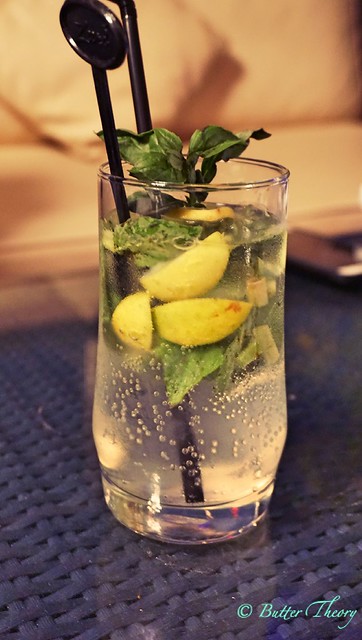 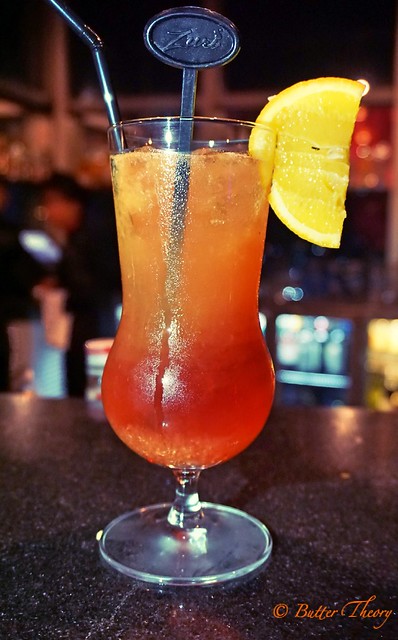 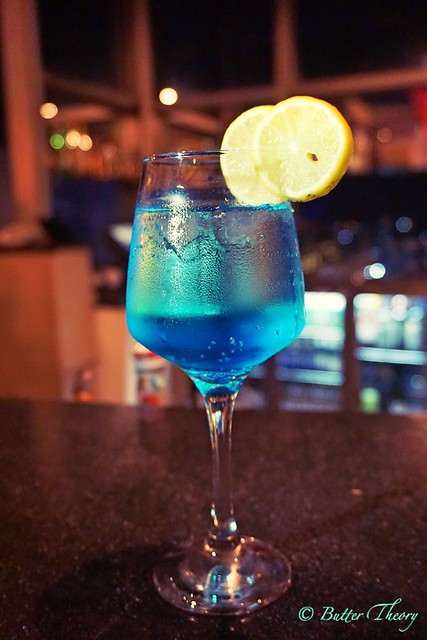 Service at a five star restaurant is usually top notch. And I could see the same here as well. All the service staff were well aware of the dishes that were being served to us. They were patient with us while we were clicking pictures. They were very courteous and served us with a smile 🙂

Areas of Improvement by Butter theory

* I would have liked to have tried more dishes without the use of coconut in them. They should have kept the focus more on the spicy that flavors that the cuisine is so popular for!

* The seating needs to change, it has to be more comfortable. There are sofas on one side and on the other side are high chairs. But the problem not really is seating in itself, but the table and seating don’t go well together. The table really has to be higher than it is now.

* Even though the lounge is on the rooftop, hardly do you get to see the skyline from where you’re seated. This is because, there is a wall, which blocks you from seeing it.

* There’s something seriously wrong about the place’s ventilation, if you’re on the rooftop, yet you’re sweating at 9PM, in Bangalore !!

* The bar needs to be at-least as good as their premium bar, Bling @Zuri . We tried a couple of mocktails and cocktails. But they were not really upto the mark.