Cafe Mangii is an Italian Bistro that has it’s presence in Bengaluru in it’s two very widely spaced locations; Malleswaram and Lavelle Road!

I was part of this very unique food walk in UB city, where some other food bloggers in Bengaluru were called upon to visit eight restaurants in a space of two days 🙂 So, on the first day, Cafe Mangii was the #final #pitstop of what was already an overwhelming food journey!

It was time for an early dinner and we were greeted by the Manager of this outlet. He was kind enough to let us just sit back, relax and just not bother about picking dishes from the menu! Some of their best creations, in terms of the appetizers! 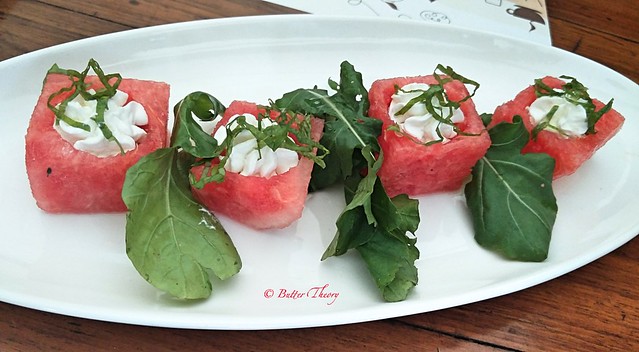 We started off with a salad and Watermelon & Feta cheese was the perfect way to start off! The perfectly diced watermelon with a feta cheese filling was topped with a mint, honey and balsamic dressing. The dressing is made with balsamic vinegar, honey, extra-virgin olive oil, some salt & pepper and sometimes dijon mustard. Fresh basil was used to garnish! This dish was tangy and fresh and I totally fell in love with this one 🙂

They also have some other salads viz. Classic Caesar , Bitter greens and Quinoa! 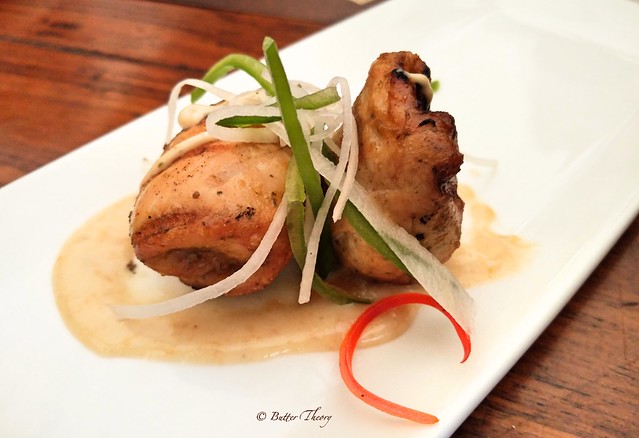 This is a scotch bonnet peppers fumed chicken served with jerk mayo and pina Colada dip! These are some flavorful pocket sized bites that you will absolutely love 🙂 The scotch bonnet peppers also known as scotty bons is a variety of chili pepper and have a heat rating of 100,000–350,000! To put things in perspective, the jalapeno peppers have a heat rating of 2,500 to 8,000. There’s a lot of heat in this one 🙂 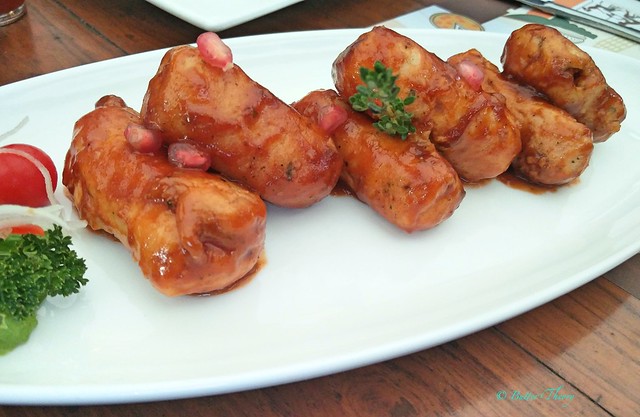 This is a scamorza( stretched curd cheese) gorged chicken blanket which is basted(tightened/stitched) with smoked BBQ sauce and apricot orange glaze. Basting is a technique used in grilling and other roasting meat preparations where the meat is cooked with either its own juices or some type of preparation such as a sauce or marinade. The meat is left to cook, then periodically coated with the juice.

The rustic polenta croutons are a tasty appetizer that is quite popular in Italian cuisine. They’re adapted to the coldest months of the year. They are an original alternative to sandwiches and can be seasoned to taste. This dish was a grilled parmesan polenta cakes with peperonata(Sweet Bell Peppers With Olive Oil, Onion, and Tomatoes) and chive aioli sauce. 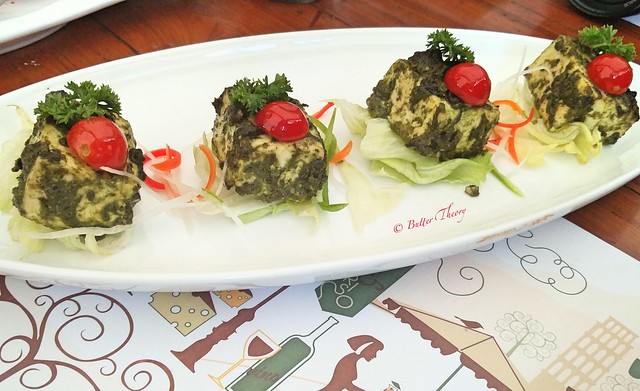 This isn’t your average paneer(cottage cheese) appetizer! This is quite different in many ways; it’s rubbed with basil pine nut pesto and house slaw(mayo, olive oil) and it’s baked! It could have tasted better if the sauce wasn’t overpowering. It was garnished with some nice button tomatoes ! 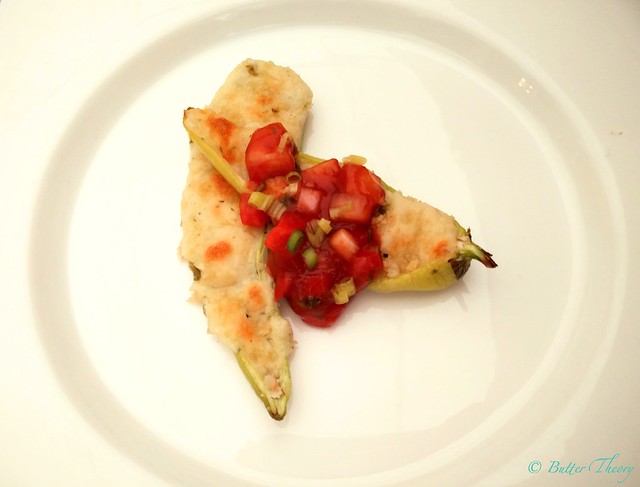 This is a very innovative dish in which jalapeno, which was probably Jaloro Peppers. The flavor and heat is similar to jalapeno but is fruitier, good for pickling! There was a cream cheese filling in halves of jalapenos, topped with salsa verde and sweet paprika. There was some garlic dip to go with this. This was not too spicy and quite crunchy and appetizing. We actually loved this one! 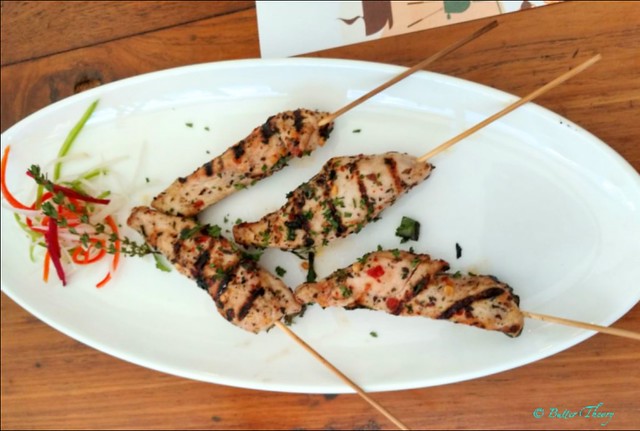 This is a chicken supreme that’s grilled. The chicken was soft and tender and had decent herbed flavors to it. This came with a house dip which was quite sweet.

What’s life without some Mangii Magic? 🙂 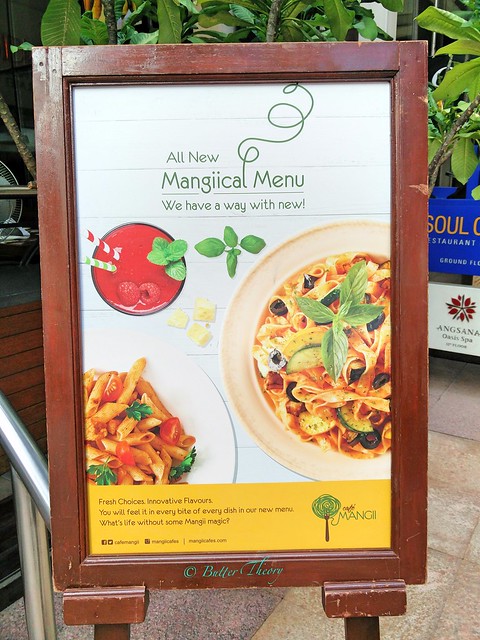 AREAS OF IMPROVEMENT BY BUTTER THEORY

* SERVICE : I believe the service staff could have been more attentive to the amount of food that we were having. They kept on dishing out food at a pace that we were not comfortable. What should also have happened is the number of plates should have been reduced as we started sharing a lot of food. We were here after spending an entire day at 3 other restaurants, so we were full. I agree, they wouldn’t know that! I just expected them to be a little more attentive 🙂

* PRICING: The pricing is very upscale and it might not quite draw people back to this place for the second time; just for this reason alone!

* We didn’t get to try what they’re famous for ; wood fired pizzas! The menu for us was curated by the management. May be, just may be, they should have sneaked in a pizza!

* Although the seating is quite cosy, there isn’t much of a gap between two tables 🙂

I would come back here just to try their pizzas and pastas . Will come here with someone who doesn’t quite have a gluten allergy, so I can share 😉 Come to think of it, almost everything that was curated for our tasting was gluten free – so good job there Mangii !!!