Aloft is a sassy business hotel. They’ve got 2 properties in Bangalore and I was invited to the one in the Cessna Business park, to dine at the chef’s table during their ongoing Mexican food festival!

It was a lazy Wednesday evening and this event was just what I needed to brighten things up! I work very close to this tech park, so the commute on a weekday wasn’t quite a problem for me. If you’re wondering where this exactly is, it’s about 1km away from the Sakra World hospital.

The decor is very urban and they like to give their staff the freedom to express themselves, with emphasis on being ‘cool’ 🙂
There is a live performance and an active social scene here. I actually enjoyed the music while I was waiting for my friends, in the lobby.

Nook, is Aloft’s all day dining, multi-cuisine restaurant. This is where we headed to, to try out their Mexican fare!!

The table that was reserved for us was well lit, which is a top requirement from food bloggers, when they’re invited to such events!! This helps in clicking good pictures 🙂

When it comes to Mexican food, all we’ve heard of and/or tried is the establishment named Taco Bell©. We have been introduced to Nachos, Tacos and Quesadillas! 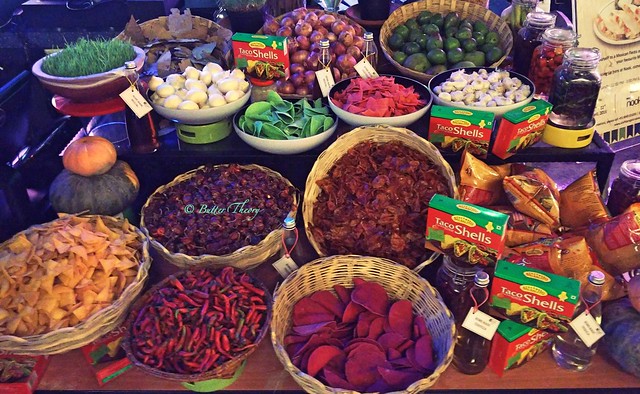 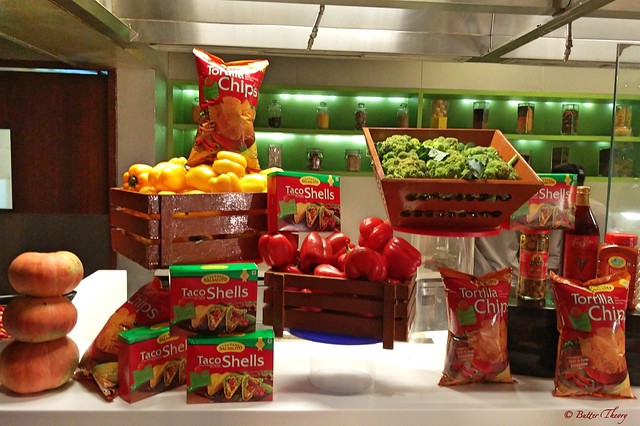 I was looking forward to what Nook,Aloft had to offer 🙂

No party happens without a bowl of Nachos and salsa dip! We kicked off the evening with just that! What was good to see was, multiple dips, apart from the regular guacamole, sour cream and tomato salsa. The other dips were : Gemada salsa, Salsa Rojo, Mango salsa and Pica de Gallo. When I’m given a lot of choices, I definitely savor the moment! 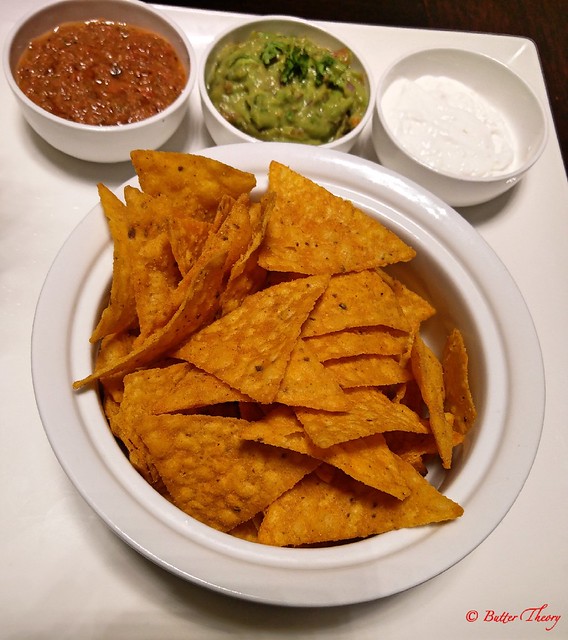 This dish not only looked good, but tasted good as well!
Frijoles are beans, in Mexican cooking. 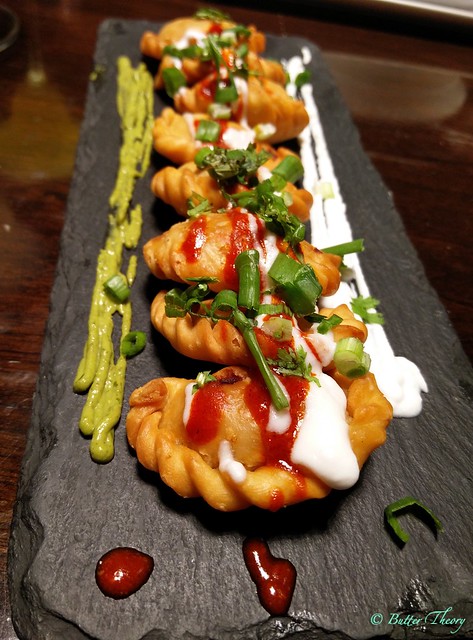 Ceviche is a classic raw fish dish. But, in Mexico, they tend to replace the fish with fresh off-the-boat shrimps! I remember having the Ceviche at Wareabouts Bar & grill earlier, so this dish was definitely familiar.
The shrimp is marinated in lime juice for long enough to give it a nice cooked texture. The taste was very good and the dish was very refreshing thanks to the salad! 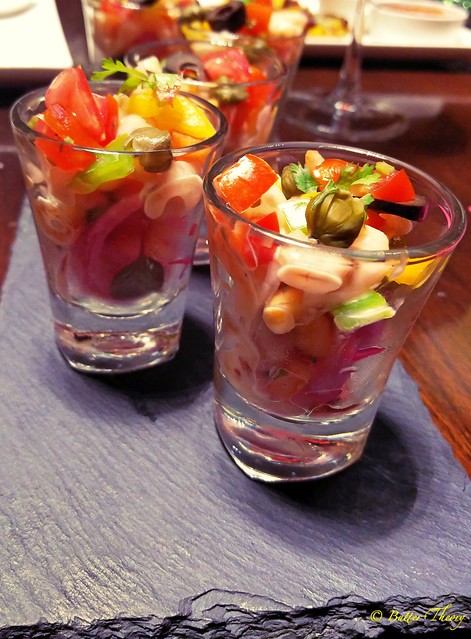 Tostada, in Spanish means toasted. In Mexico and other South American countries, tostadas are used as a base for most bite sized snacks.
The filling in the tostadas was corn and beans, with just a bit of melted cheese. This was served with salsa. We felt that the preparation was pretty dry in itself! 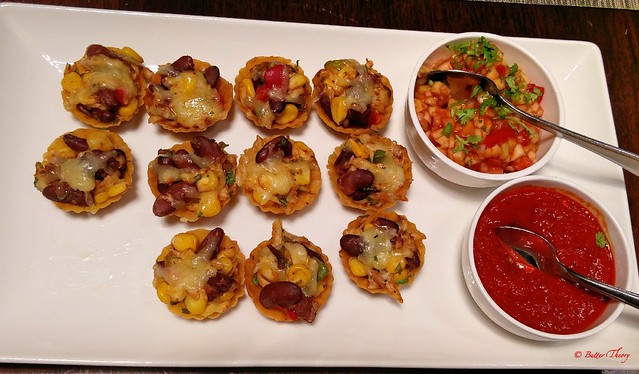 This was a salad with Spinach, fresh mangoes, avocado, radish and tomatoes. I personally have salads for dinner almost every day. So, I wasn’t very keen on this one. I quickly wolfed down, two very likable items on the plate; mangoes and avocado! The rest of greens were skipped, it felt a bit too healthy for my liking 😉 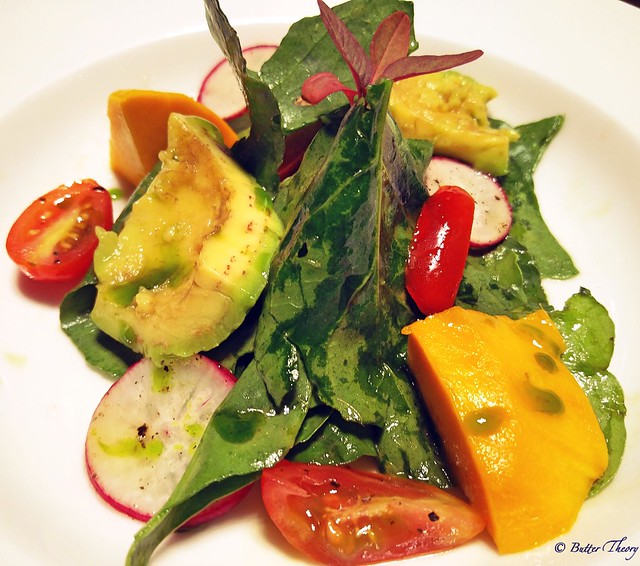 Quesadilla is a corn/wheat tortilla filled with cheese, savory mix(veg/non-veg), wrapped in a nice triangular form to help in gobbling them down easily!

We had both vegetarian and non vegetarian options. The vegetarian one was having a slightly crispier crust compared to the non-vegetarian option. This may well be attributed to the difference in the dough used to prepare them. I loved the chicken Quesadilla, which had just the most amazing balance in the mix. The chicken tasted very good as well. Every single bite that I had, I could feel the power packed flavors of the savory mix.

This was by far the best dish for me!! Now that I’ve mentioned the best dish of the day, don’t be lazy, go through the rest of the items that I have listed, please 🙂 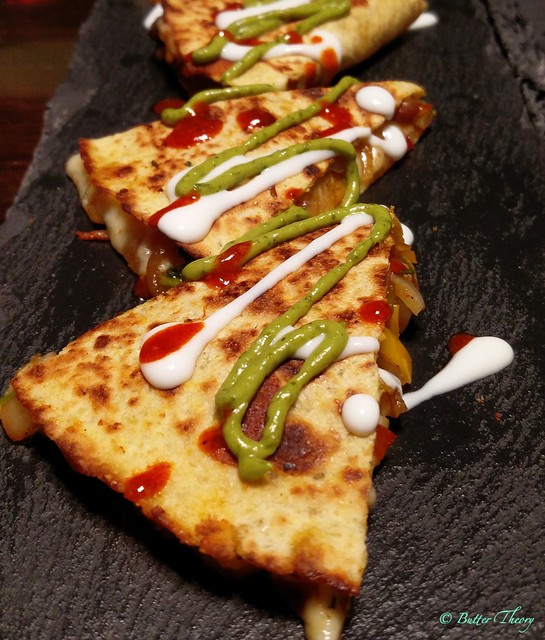 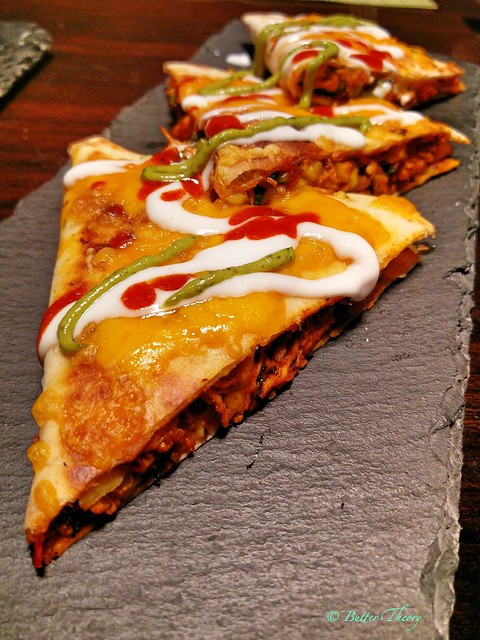 Taco is a traditional Mexican dish , with the shell made of corn(usually) or wheat(less common) , folded at the center. You’d fill them up with a bean or a chicken savory mix along with salsa, guacamole, cilantro, tomatoes, chilly and lettuce. You’d usually have them in either the crunchy shell or the soft shell.

We were given a chicken taco with a crunchy shell. I thought that the dish could not do what the quesadilla did with the balance of flavors. Also, I found the mix very dry and not appetizing at all. For their standards, it was not right up there 🙂 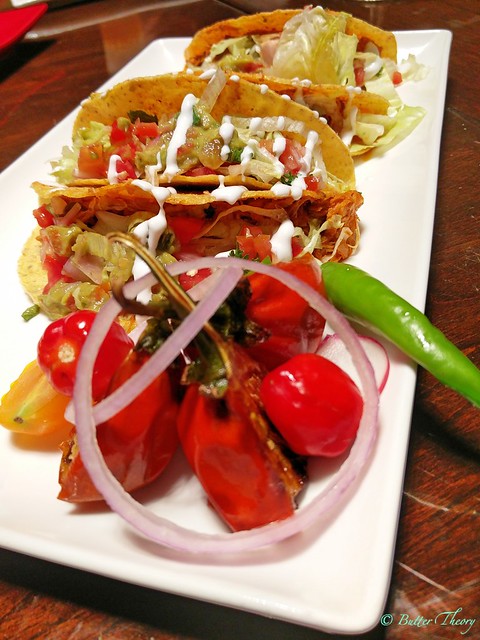 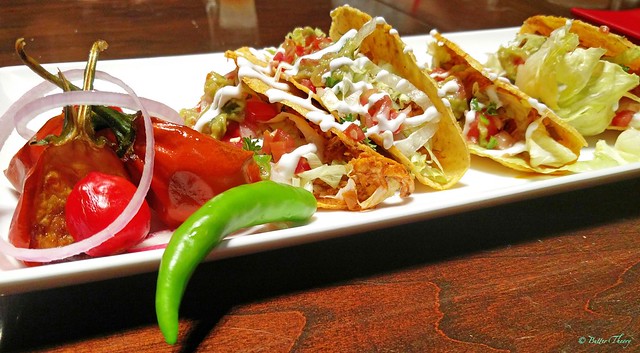 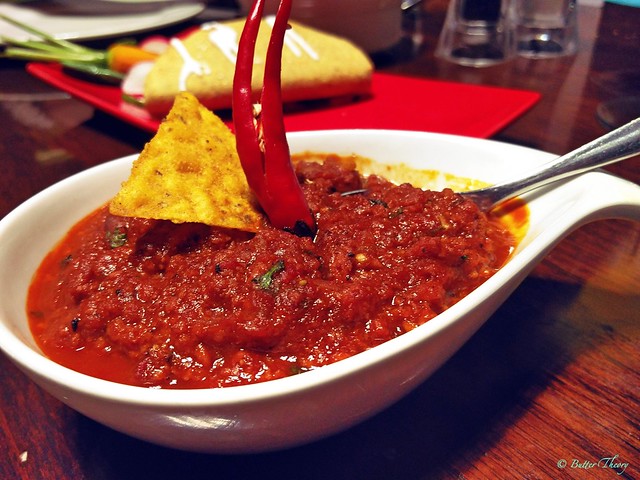 When this dish was presented to us, I was spellbound! It was so beautifully plated and I just couldn’t believe how lucky I was to have the chance to taste such a creation 🙂 Now, for those of you who don’t know, a chicken steak is my most favorite savory dish, so I was really excited to try this out.

What was interesting in this, however, was that the mole sauce used is a chocolate based sauce, which I had only seen in these Masterchef series, but never had the chance to try it! The sauce I learn contains pine nuts, chocolate, onions, cinnamon, almonds and sesame seeds. I was quite anxious to dig in. The very first bite of this, I found that the taste was polar opposite to the pepper sauce that I usually have my steak with!

I would frankly say that my taste buds aren’t used to having this, but upon speaking to the chef, he said it takes a bit of getting used to, in order to like this sauce! I think this dish truly deserves to be the stand out preset main course dish, for the evening! I’m hoping that I get to try this out again 🙂 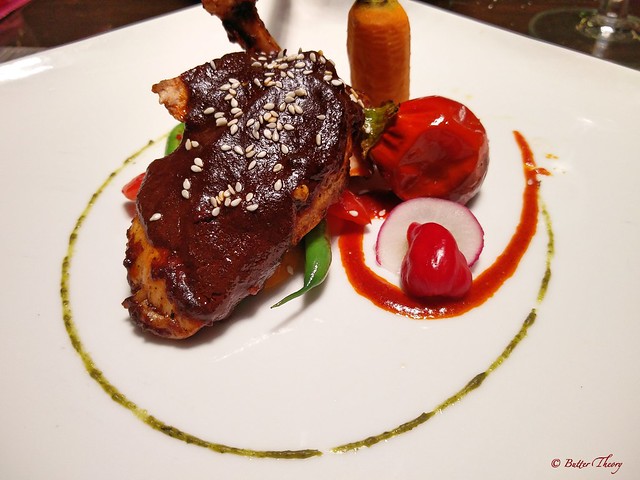 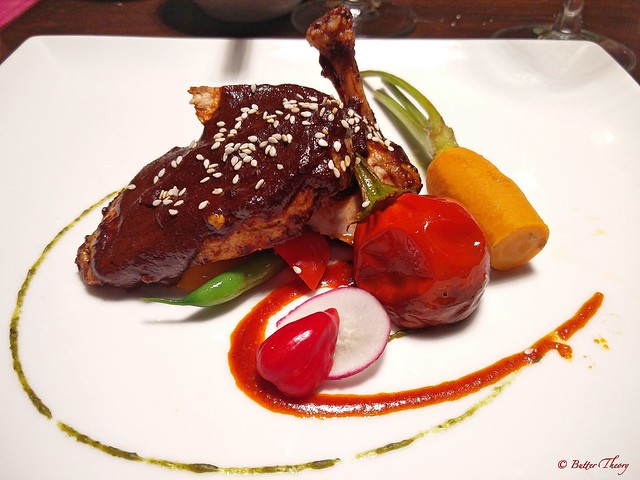 This was another beautifully presented dish. Tamale is a Central American dish which is made with starchy dough, usually made of corn. The dough is then steamed in a corn husk. The filling was however something that was purely vegetarian. I did manage to grab a bit out of my friend’s plate! I thought the dish was pretty average in terms of the taste. 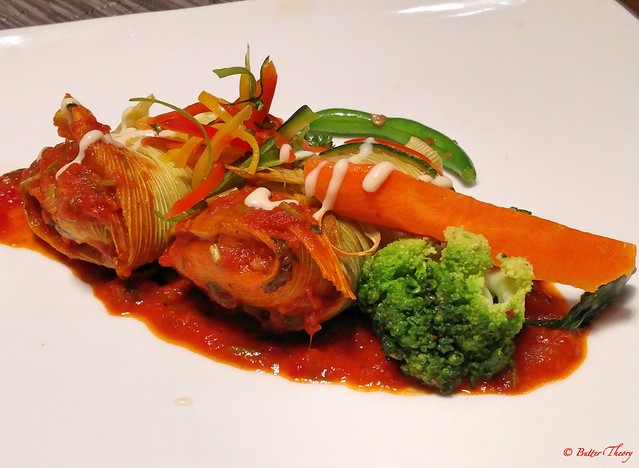 There were 2 desserts that were served to our table. One was churros with 3 different flavors and 2 dips. The other was Tres Leches.

I would frankly tell you that I had never had the chance to have a churro, earlier. This was definitely something that looks pretty colorful. In preparation, this is similar to how a doughnut would be prepared. This would fall under fried dough category!!

Churros are fried until they become crunchy, and then sprinkled with sugar. The surface of a churro is ridged with a star-shaped nozzle.

We tried three different flavors, one of which was quite bad. The dips were mango and chocolate. This was a pleasant experience for me to have the churros for the first time 🙂 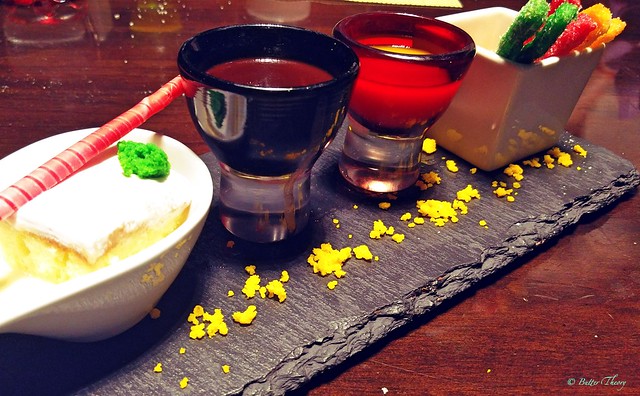 Tres Leches is a butter cake which is soaked in 3 kinds of milk; evaporated, condensed and cream. The dish tasted absolutely amazing because of the milk part of it and I couldn’t help but reach out for a second serving of it! The cake was very soft and the sugar balance was very good. I loved this dessert! 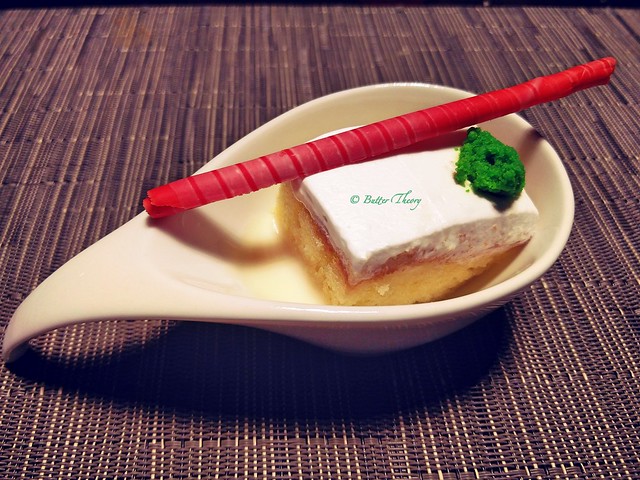 I would like to thank Executive Sous Chef Sandeep Kumar, who is a seasoned chef with a vast experience in the hospitality industry, for giving us company, through the entire duration of our dinner. He gave us a lot of valuable insights into how the food is prepared and the kind of standards and processes they follow at Aloft. He was happily sipping a few mugs of tea, while we were having the lovely food. The menu was crafted by Chef Sandeep, but was executed to the ‘T’ by Chef Murli 🙂 The service staff was extremely courteous and attended to our every need. They did a fantastic job at serving us the food and giving us the right amount of gap between dishes!

I had a great dining experience and would love to come back here to try the regular fare at Nook. I wouldn’t change a thing, I believe the menu was very well conceptualized and executed 🙂

I would also come up with a separate blog post for the different spirits we had on the same day!!
That would be tagged under their WXYX Bar 🙂 Watch out for that!